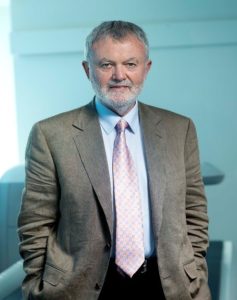 Professor Sean (JJ) Strain is Emeritus Professor of Human Nutrition at Ulster University. After graduating with a BSc (Chemistry), BAgr (Agricultural Chemistry) and PhD (Nutrition Biochemistry), from Queen’s University, Belfast, Sean spent several years (1977-1980) in academia in Australia before joining his current institution in 1981. He was appointed Professor of Human Nutrition in 1994 and was also Director of the Northern Ireland Centre for Food & Health (NICHE) before retirement in December 2015. He has attracted over £36M in research grants and is an author of over 300 peer-reviewed research publications (H-index =66 Google Scholar). In 2002, he was elected a member of the Royal Irish Academy and was the 23rd President of the Nutrition Society (2010-2013). In 2014, he was appointed Order of the British Empire for services to nutrition research and education. Other prizes include the British Nutrition Foundation Prize 2012 and the William Evans Fellowship, University of Otago, New Zealand. He was President of the European Nutrition Leadership Programme, Luxembourg, Vice-Chairman, Panel on Dietetic Products, Nutrition and Allergies (NDA), and Inaugural Chair of the NDA Working Group on Claims, European Food Safety Authority (EFSA) Parma (2006-2015). He remains a member of the Claims Working Group and chairs the Science Advisory Panel to High Value Nutrition, New Zealand. jj.strain[AT]ulster.ac.uk